Hillier Lake is a saltwater lake. Located on Middle Island, the largest of all the islands and small islands that make up the Recherche Archipelago in the Gold Field-Esperance. Nice (Goldfields-Esperance) off the southern coast of Western Australia. Surrounded by more than 105 small islands, the distinctive feature that makes this lake famous throughout the world is Is a lake with pink water Which is a very remarkable natural phenomenon It was first discovered by Captain Matthew Flinders when he reached the highest point of the island in 1802.

This Hillier Lake is located on Middle Island, Australia. Is a lake that is about 600 meters long with a narrow border covered with white salt sheets And surrounded by dense trees Separating the lake from the sea, the surrounding area is Paperbark and Eucalypt trees. 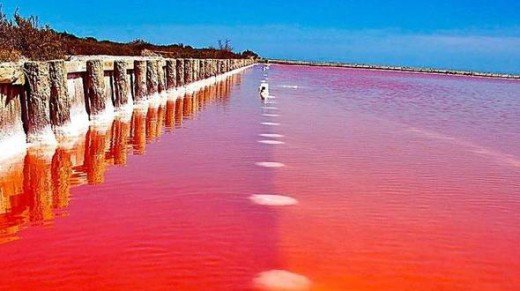 Strange that the water in this lake is pink like strawberry milkshake. And although there are many pink lakes in this world But Hiller Lake is different from other pink lakes Where the water in the lake is really pink, as sweet as cold milk Not caused by sediment, reflection, or algae in the water. When drawing the water from Lake Hiler into a bottle, it gets clear pink water. And will remain pink like this forever

The lake water has been scientifically analyzed. But still unable to find the cause of this strange phenomenon that is caused by water to pink. There are many assumptions. But that sounds most reasonable because there are a lot of bacteria called Dunaliella living This type of bacteria produces red substances for absorbing sunlight. Causing the lake water to change to a soft red color When exposed to sunlight, it can be seen as pink.

The only living thing on Hillier Lake is Dunaliella salina, a microorganism that causes the salt in the lake to produce a red dye. Until causing the said color Another hypothesis states that Pink comes from the red helophilic bacteria in the salt flakes Even if there are abnormal colors But the lake has no harmful effects on humans If viewed from above The lake is pink like gum. But from the coastline will have a clearer pink The coast is also covered with salt flakes.

Although it has high salt levels (Compared to the salt levels in the Dead Sea) the lake is a safe place to swim. But there are few trips to reach Hilary Lake Helicopter travel is the most common method. Sailing is another option for passengers who want to visit remote lakes and forests around it.

However, there are still tourists who travel to see strange phenomena continuously.

Search in this web